The large scale structure in the Universe evolved from the early linear density field. For this reason it carries the signature of early-universe processes like the initial thermal properties of the dark matter field or the impact of early dark energy onto the geometry of the Universe, as well as the characteristics of late-time, non-linear mechanisms like the collapse of overdensities under gravity into large scale structure.

The distribution of large structures cannot be probed directly as they consist of mostly dark matter. For this reason there are several observational probes at our disposal. In our group we use existing data as well as make forecasts for future data from surveys that map out the distribution of galaxies in the universe, Weak Lensing surveys, Cluster counts measurements, Cosmic Microwave Background secondary anisotropies etc. We also run numerical simulations to construct phenomenological models that describe the formation of this structure in different scenarios like Dark Energy, Modified Gravity, Warm Dark Matter etc. 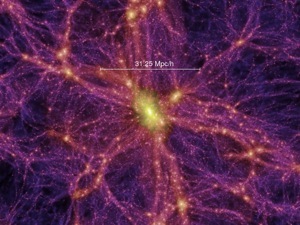