The cosmic microwave background radiation was formed when the Universe was only about 300,000 years old, by effect of the decoupling of photons and electrons in the primordial plasma. This radiation has a nearly perfect black-body spectrum, with small anisotropies of order 10^-5 due to the local fluctuations at last scattering. In our group, we use the latest CMB data in conjunction with other cosmological probes, to constrain a wide range of models such as modified gravity theories, dark energy, dark matter, and models of the early universe detectable by their characteristic primordial non-Gaussianity or non-adiabatic initial conditions.

After the production of the CMB, these photons streamed mostly freely across the Universe. A small fraction of them, however, could undergo an energy shift, due to secondary effects at late times. Two of these are particularly interesting to our group: the integrated Sachs-Wolfe (ISW) and the Sunyaev-Zel'dovich (SZ) effects. 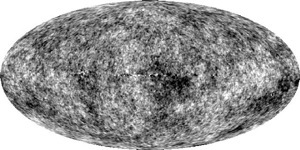